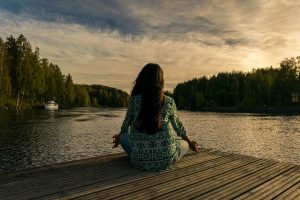 The origins of mindfulness

Mindfulness derives from a particular type of Buddhist meditation called vipassana meditation, born in Burma more than 2500 years ago and today one of the most widespread forms of meditation also in the West.

Mindfulness is considered the “modern” version of this type of meditation, deprived of all mystical aspects but rather based on a modern clinical approach.

Mindfulness means awareness and acceptance of the present moment.

It is a psychological treatment that aims to eliminate suffering by understanding and accepting everything that happens. It allows you to get to the awareness of what is happening, in a lucid and serene way. It is a practice that allows you to go from a state of suffering to a state of well-being.

This awareness is achieved through meditative practices.

Mindfulness is a way of pre-empting attention, moment by moment, which allows you to grasp more quickly the origin of negative thoughts, the cause of emotional malaise.

Unlike the classic psychotherapy sessions, meditation through the mindfulness technique is performed by sitting with your eyes closed, legs crossed with your back straight, focusing on breathing.

The session is assisted by a therapist.

The mindfulness therapeutic intervention has led to many positive aspects in the clinical field, especially in the case of:

Anxiety and depression are very common conditions in patients diagnosed with cancer and in most cases they are treated with a traditional psychological approach.

Many studies in the literature suggest that numerous improvements are also achieved through mindfulness meditation (1).

The results showed that anxiety and depression levels had significantly decreased after several mindfulness sessions.

Mindfulness is a safe therapy that can be performed by everyone.

To date, there have been no side effects and contraindications of any kind.