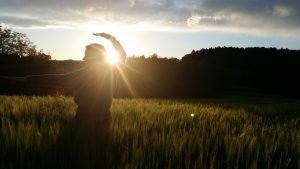 The origins of Qi gong

The birth of Qi gong 2 dates back to a few millennia before Christ, during the Yao period in China, where the discipline presented itself in the form of ancient ritual dances aimed at driving out the demons responsible for pain and suffering.

Only in the Tzou period (1030 – 760 BC) did the movements of these dances begin to be considered physical exercises aimed at body health and which began to be handed down over the years.

In 1960 in China, for the first time the scientific community became aware of the effects of Qi gong on health so as to officially recognize it as a therapeutic technique.

Qi gong was included in the National Health Plan in 1996.

What in Qi gong

Qi gong falls within the disciplines of traditional Chinese medicine and we can define it a “gentle gymnastics“, both preventive and curative, based on the flow of energy in the meridian system on which acupuncture traditionally acts.

The practice of Qi gong consists of a series of physical exercises, both static and dynamic, techniques of mental concentration and control of breathing, emission of sounds whose vibrations are intended to harmonize the different vital organs. The Qi gong techniques allow to support and circulate vital energy along the meridians, with the aim of preventing or dissolving energy blocks and correcting imbalances in order to achieve physical and mental well-being and greater resistance to stress and to pathogenic factors.

The medical applications of Qi gong are manifold:

The ideogram indicating Qi is translated by some as “energy”, by many also “breath” and in some contexts “breath”.

Within the human body, this “breath” becomes the essential energy for all vital activities. Mobile and invisible element (like air) the “Qi” circulates in the meridians inextricably linked to its material aspect, the Blood.

The Gong character has been translated in many ways, but indicates the result obtained with a long, patient and constant practice. Briefly, it can be translated as “work”, as it includes an effort applied over time and a patient commitment.

The ancient texts teach that the original Energy, “Jing of the anterior sky”, from which organic Qi originates, was transmitted to us by our parents and that after birth the body continually replenishes it through food and breathing. Over time, organic Qi can be slowed down, impoverished, obstructed, due to hereditary factors, food errors, and inadequate psycho-emotional dynamics.

When the Qi is insufficient, the body is predisposed to chronic degenerative pathologies, the person feels weak, often he is tired, suffering and vulnerable. When instead the Qi is in excess the person is angry, hyperactive, often hypertensive and highlights acute inflammatory pathologies. When Qi freezes (stasis), however, you enter a state of depression.

In all these cases, the Qi gong exercises primarily pursue the objective of:

Ultimately, the practice of Qi gong strengthens the consciousness and the organism against the attack of pathogenic factors, both psychic and physical, preventing and fighting diseases.

Several studies in the literature have shown that the use of Qi gong in the treatment of cancer can provide support and the improvement of different situations (1):

These results demonstrate that practicing Gi gong during the disease path contributes significantly to improving the patient’s quality of life.

Who can practice Qi gong?

People of any age can practice Qi gong; the body work, in fact, is quite different from the typical exercises practiced by the western “fitness” disciplines. The Qi gong exercises do not aim at physical effort due to muscle contraction or endurance performance, since the goal, on the contrary, is to obtain a sort of generalized relaxation of the mind and body to circulate vital energy in the best way and increase the level of attention / concentration on the “present moment”.

To date, no risks of any kind or side effects have been found in those who practice in Gi gong, even in the case of pathologies.

Dr. Stefano Puri – Qi Gong Instructor, professor of Energy Supply according to TCM and the biotype and food sustainability expert