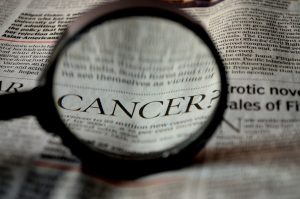 According to the World Health Organization, cancer (or tumor or neoplasm) is not only a disease but a group of diseases that can start in almost all organs or tissues of the body and is characterized by the uncontrolled growth of abnormal cells that cross their usual boundaries to invade adjacent parts of the body and / or spread to other organs, with a process called metastasization.

Cancer is a genetic disease caused by the accumulation of genetic anomalies (mutations and chromosomal alterations) and epigenetic changes affecting genes that control proliferation, differentiation, cell death and the integrity of genetic heritage. Mutations can be spontaneous or derive from replication errors or DNA damage caused by “carcinogenic” agents, internal or external.

Carcinogenesis, that is the transformation of a healthy cell into a cancer cell, is a long and complex multi-step process that requires the accumulation of more mutations in the DNA of the cells. The mutations that the cell has accumulated make it unable to repair DNA damage or to go to cell death; the consequent survival and uncontrolled replication of the abnormal cell can give rise to a tumor mass. The mutation is generally “somatic”, it is not transmitted hereditary, but, in a minority of cases, a mutation may be present at a “constitutional” level, in all the cells of the individual and therefore may have been inherited by one or both parents.

There are three stages of carcinogenesis:

It is not certain that the mass that has formed from this process is malignant. Often the neoformations are benign, that remain well localized in the organ where they were formed, bounded inside a capsule and without invading nearby tissues.

They are tumors characterized by slow growth and favourable prognosis.

The most common benign tumor forms are:

Over time, a benign tumor can remain that way or transform in malignant and for this reason it is not uncommon for a benign mass to be removed.

The process of transforming a benign tumor into a malign one can be rapid or take many years.

The term cancer is used only when the tumor is malignant.

The malignant neoformations, unlike the benign ones, have the ability to develop in an uncontrolled manner, in some cases without spreading to other tissues besides that of origin (examples of cancers in situ: breast cancer, melanoma, colon cancer, etc.). In other cases, the ability of the tumor to expand at a distance, ie outside the site of onset of the primitive tumor, allows the invasion of distant organs with a process that takes the name of metastatization and the new masses that are formed are called metastases.

The prognosis is often poor. In most cases, in fact, the presence of metastases is a sign of disease at a very advanced stage.

The spread of the tumor can occur:

Regardless of the way of diffusion, the tumor can spread to any part of the body even though the most common sites of metastasis are liver, lung, bones and brain.

The most common malignant forms of cancer are:

What are the causes of cancer?

As we have already said, cancer is a genetic disease caused by the accumulation of a critical number of mutations, but why do these mutations appear? In some cases they are due to random errors during the life cycle of the cells, in other cases they can be caused by exposure to mutagenic environmental factors or they can be inherited by one or both parents.

The genes that, if altered, are involved in the onset of cancer are the following:

What are the risk factors?

Risk factors are all those factors that increase the probability of developing cancer because they increase the risk of mutation.

It is not possible to identify a single risk factor involved in tumor genesis; cancer is in fact a multifactorial disease, ie there are many risk factors that add up and determine the onset of the disease.

Age is an unmodifiable risk factor.

The forms of cancer typical of adulthood are:

Familiarity is an unmodifiable risk factor.

However, genetic tests are available to identify possible mutations. A positive result indicates that there is a greater risk of developing the tumor while a negative result does not exclude that one cannot get cancer but certainly is less at risk because the altered genes have not been inherited. Knowledge of the genetic test result can allow the implementation of prevention protocols and participation in early screening programs, as well as lifestyle changes.

The possibility to undergo these tests must be evaluated with the doctor when there is a real risk of getting sick.

The main hereditary forms are:

The factors related to lifestyle that have the greatest impact are the following:

Smoking is correlated above all with the development of lung cancer, oral cavity, throat, esophagus, pancreas, colon, bladder, kidney and breast.

Each of these lifestyle factors can be changed.

The factors most involved are:

Particular categories of workers are often exposed to these pollutants.

Contracting one of these infections does not surely mean developing a tumor but only increases the risk.

Many of these risk factors are modifiable or only in part.

According to 2014 ISTAT data, approximately 29% of the total deaths that occurred this year were due to cancer (177,301 out of 600,000 deaths). In women, tumors are the second leading cause of death (25% of all deaths) after cardiovascular diseases (40%) while in men, cardio-vascular diseases and tumors are both the leading cause of death as they cause about the same number of deaths (34%).

The 2017 data, compared to the previous ones, show a considerable increase in the survival of people who have had a cancer diagnosis (+ 24%). The only tumor for which survival has been reduced (- 10%) is that of the cervix. The number of patients living after a diagnosis of stomach, larynx and ovary cancer remains stable.

Not distinguishing by type of cancer and sex, the 5-year survival, that is the number of people alive after 5 years from the diagnosis, is equal to 60%, while the 10-year survival is 35%.

The percentage of patients recovered, ie with a life expectancy similar to the healthy population, is 27%.